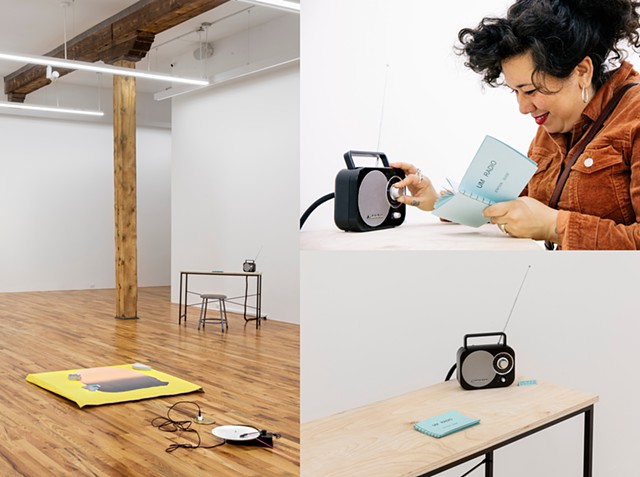 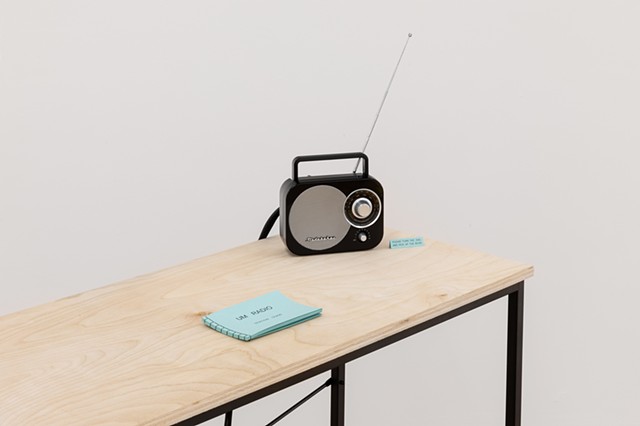 "Um Radio" broadcasts the involuntary, messy sounds of Chicago's NPR journalists and interviewees as they try to talk. It was part of the "Return to the Everywhere" exhibit at Weinberg/Newton Gallery, in collaboration with WBEZ. "Um Radio" prompts listeners to feel a connection with other humans through the absurdity of struggling to say anything clearly: from the strained "um"s as Jason Van Dyke is interviewed, to the melodramatic laughter from a children's fairytale program, to Ira Glass's sighs and imploring "You know?"s. The only station where we are allowed to hear the content of what's being said is from Joe White, a poet who was incarcerated for life, until a radio documentary broadcasted the injustice of his and his fellow inmates' situation, leading eventually to their release. You can read about each station here.

“Um Radio['s]"... recordings convey how language and cadence are used when reporting on sensitive events. Visitors have the control to swap channels themselves, and each recording is labeled with a date and event. The most notable recordings come from August 29, 2018: The Laquan McDonald murder charges and hearings for Chicago Police Officer Jason Van Dyke are being discussed. Strikingly, the word “um” is uttered more often than in any of the other tapings. - Ciera Mckissick, “Return To The Everywhere” at Weinberg/Newton Gallery, Chicago Artist Writers, March 2020

Gwyneth Zeleny Anderson delved deeply into the archives for “Um Radio,” an interactive, modified radio that doesn’t transmit radio signals, but instead broadcasts collaged WBEZ audio tracks made up of interstitial, mostly nonverbal sounds. Working with WBEZ’s media archivist Justine Tobiasz, Anderson located a range of voices and programs: high-pitched, low-pitched, laughs, sobs, stories of fantasy and harsh reality. As visitors turn the dial to hear the different “stations,” they can reference a handmade book by the artist, which offers contextual information on each track. A 2018 “Morning Shift” show plays in the aftermath of Laquan McDonald’s murder. A show from 1993 discusses the neo-Nazi movement in Germany. On a broadcast from 1996, guests reflect on then-President Bill Clinton comparing his wife to Eleanor Roosevelt. A “Wild Room” episode, also from 1996, offers audio snippets of the clashes between police and protesters outside the 1968 Democratic National Convention. Anderson’s choices reflect the cyclical nature of news. - Kerry Cardoza, "The Tenuity of Truth: Weinberg/Newton Exhibition Situates Art in Our Post-Factual Era", NewCity, March 2020 Thank you: Kasia Houlihan and Weinberg/Newton Gallery for making this project possible. Justine Tobiasz and WBEZ Chicago for the audio, permissions, and guidance.